The reign of Queen Elizabeth the First was a bit of troubled one at times. Her Father King Henry the Eighth had done nothing to expand the country save to create a new divisive nation with the creation of a Church of England so that he could divorce whatever wife he was bored with until one gave him a Son. For the most part Europe was Catholic and one of those Countries was the all powerful Spain. At this time the Spanish ruled the waves and  were getting very rich on the plundering of the New World that controlled. When a proposal of marriage between Philip of Spain and Elizabeth fell through, along with our sponsored Pirates constantly raiding their gold ships, there was only going to be one outcome. Spain decided to invade using it’s hugely overpowering fleet, the Armada. 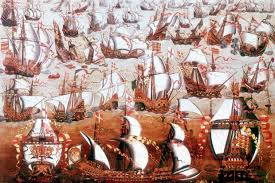 The fact that we do not speak Spanish as our main language and still of the Anglican church lets you know the answer to the outcome but who did the English do it? (Don’t forget that Scotland and Ireland were not part of the Union at this point and Wales was not involved). On paper it looked like a definite victory for Spain. They had more ships and they had seasoned troops in the Netherlands ready to come over so there was no chance of prolonged seas sickness or have the soldiers all cooped up. 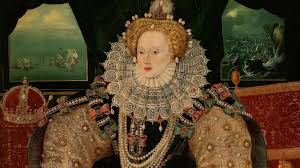 The three crucial factors were the weather, it was terrible and the Armada was buffeted by storms from day one (which played into the Anglican claims about God) and they were not allowed to engage with the English ships as they were ordered to get the troops first. Finally although we had less ships they were faster, smaller and more maneuverable doing hit and run attacks before the lumbering galleons could open fire. Plus they had the Oak like you would see in Oak Garages. They were as solid as they are today.