As the benefits of plasma treatment have grown clearer over the decades since the discovery of plasma in 1951, plasma spraying has become one of the most popular and effective methods of applying this versatile form of coating. Its industrial uses have grown to encompass industry sectors such as aerospace, marine engineering, automotive, nuclear, and biomedical. 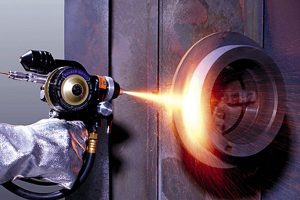 Originally developed to improve the adhesiveness of surface materials like plastic and metals, this electrically enhanced gas is now recognised for its significant protective properties. Plasma spray is routinely used for corrosion protection, damage repair, wear-resistant coating, thermal insulation and the modification of thermal or electrical conductivity. The industry’s growth has led to the founding of professional associations dedicated to the promotion and support of member companies.

What is Plasma Spraying?

It is a process that uses extreme heat to transform particles to a molten or semi-molten state and apply them to the substrate, or surface, of a product. The temperatures reached are regularly as high as 15,000°C, which effectively means that any metal or ceramic substance can be used. 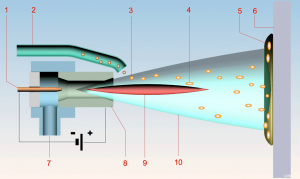 The powdered particles, known as feedstock, are injected into a plasma flame, heated rapidly, then sprayed through a plasma torch or ‘gun’ onto the surface to be treated. Their speed and temperature are governed by the type of plasma gas (arc gas) used in the spray. The most common gases are argon, helium, hydrogen and nitrogen.

In most cases, the optimum size of particle for even heating and application is a diameter of 10 to 90 µm, while the ideal shape is spherical. It is also important that the spray is maintained at a constant rate to ensure even coverage.

The molten particles, or droplets, attach to the substrate and spread out. As they cool, they harden into a strong protective coating. Because the plasma spray achieves total coverage, it creates a highly durable resistance to corrosion or oxidation. The molten state of the feedstock on contact means the particles will conform easily to any irregularities in the host surface.

This gives invaluable protection against the hazards of environmental conditions. It’s commercially available from many highly specialised operations, such as https://www.poeton.co.uk/standard-treatments/plasma-coatings/, and recognised as an indispensable tool in modern manufacturing.

While plasma spraying has come to be relied on by manufacturers in sectors such as the aerospace, marine, automotive or even space industries, it has a multitude of smaller-scale applications. It is particularly effective in perfecting the integrity of ring seals, engine parts, household white goods and other appliances, and even medical and dental implants.

There are even circumstances in which plasma spraying is used without any substrate. This is known as powder processing, a method of creating autonomous objects in which the particles solidify in flight or in a controlled environment like water.

However plasma spraying is used – in industrial manufacture, R&D, or for medical or domestic purposes – the preparation and processes involved are complex, and its importance to modern manufacturing cannot be overstated.